Greater West Houston is anticipated to reach a population of 3.26 million by 2060.  As a result, the demand for parks and open space will be greater than ever before.  However, parks and open spaces are often an afterthought in terms of planning, coordination, and funding which could lead to a failure to meet the anticipated need created by the imminent growth.
-Goal-

Research shows that quality parks and open space improve the quality of life for citizens and increase surrounding land values.  In order for Greater West Houston to remain competitive and meet the demands of population growth we must ensure that we provide a comprehensive park and open space system that will meet the needs of the community for future generations while creating sustainable benefits in terms of connectivity, mobility, drainage and quality of life.
CONNECTIONS

Isolated Spaces. While Greater West Houston currently enjoys many great parks and open spaces, it is critical that we continue to provide meaningful, high-quality facilities to keep up with anticipated population growth.  Many of the existing facilities are isolated from other parks as well as residential areas, schools, community facilities, and commercial areas where citizens spend the majority of their time.

Greater West Houston is home to the City of Houston’s largest park (Cullen Park) and Harris County’s largest park (George Bush Park) in addition to hundreds of other park spaces including the more than 20,000 acres of land preserved by the Katy Prairie Conservancy.  Unfortunately, many of the region’s parks are isolated or are only connected via roads to neighborhoods, schools, retail spaces, transit stops or other parks and open spaces.  The lack of green corridors connecting the various destinations of our everyday lives increases the demand on vehicles and roadways.

Connecting the Dots. We must identify opportunities to connect areas in order to create a more cohesive park and open space system throughout the region.  Providing a relevant network of parks and trails throughout Greater West Houston will promote quality sustainable growth and significantly benefit the people, environment, and economics of the region.

The system of creeks and bayous throughout the region provides the best opportunity to connect many of the existing facilities.  Efforts like Harris County Flood Control District’s Frontier Program and the Energy Corridor and National Parks Service’s West Houston Trails Master Plan will greatly improve connectivity to Greater West Houston’s signature spaces.  Additional corridors along drainageways should be identified and programmed accordingly to create a regional greenway system.  However, because our drainageways typically run west to east, pipeline and utility easements should also be considered as a means to provide north/south connectivity.

Adequate Funding.  One of the greatest challenges every community faces with respect to parks and open space facilities is funding.  Having adequate funding to construct and maintain these facilities is critical.  Greater West Houston is fortunate to have a variety of sponsors including municipalities, counties, utility districts, management districts, land conservancies, private organizations, and federal and state grants all of whom contribute to the creation and maintenance of parks and open space resources in the area.  However, having multiple entities focused on different objectives can lead to missed opportunities due to a lack of coordination among the various groups.

Funding & Various Engaged Entities. Cities, counties, special districts, and elected officials must engage with communities, non-profits, property-owners, developers and the business community as a whole to coordinate funding as well as connectivity.  Thoughtful coordination is necessary to connect the open spaces across Greater West Houston and to help avoid overlooking underserved areas and duplicating efforts.  Improved coordination and attention to connectivity will result in a more cohesive parks and open space system and higher quality of parks throughout the region. Such coordination should pay particular attention to connecting schools and retail to neighborhoods, connecting underserved neighborhoods, and preserving natural resources.
‍
The use of public-private partnerships can leverage traditional public infrastructure projects to include natural and recreational amenities that enhance project benefits.  Projects like Conrad Sauer Detention Basin, Rick Rice Park, the Mischer-Kickerillo Preserve, and the Westchase CenterPoint Trail illustrate how parties can combine land uses to incorporate parks and trails that enhance the community. The ability to provide a unified system is critical to the region’s continued success. 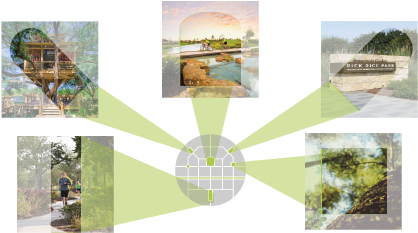 Population Growth.  As the region continues to grow, it is important that park and open space resources keep pace with the increase in population.  The National Recreation and Park Association (NRPA) has established metrics to assist with the effective planning and management of park and open space areas.  These standards should be used as a guideline to identify best practices for the development of parks and open spaces and ensure that the needs of the community are being met.

Opportunities.  Greater West Houston has demonstrated a tradition of quality growth. The region is well prepared to meet the task of providing quality outdoor recreation facilities as well as promoting alternative transportation avenues via a cohesive linked parks and open space system.  Enhancing recreation, conservation, and active transportation within the region can have a positive impact on the public health and environment of Greater West Houston. Natural spaces have a beneficial influence on cognitive development of children and can be a place for adults to become active and mentally recharge from the demands of everyday life.

Natural areas should be preserved where appropriate and utilized as natural habitats for plants and animals allowing them to thrive for future generations. The risk of flooding can be minimized, and in some instances prevented, by limiting development along natural drainage corridors and floodplains by utilizing the corridors as detention areas during storm events.  Tracts of medium to large open spaces can potentially help to reduce CO2 and heat island effects as well as pollution from increased development.  On smaller tracts of land Low Impact Development (LID) strategies can be incorporated to provide enhanced stormwater management and treatment through a network of vegetative landscapes located on site.

Economics.  People often enjoy seeking the refuge of natural open spaces as a retreat from the city. Making it a priority to plan parks and open spaces that are thoughtfully incorporated into future development will increase the appeal of the land adjacent to the parks and open spaces and therefore increase the value of the area. The value of land adjacent to parks is perceived to be of higher value than land located farther distances away. Many large corporations across the U.S. have begun integrating open green spaces into their campus designs. Studies have shown that providing such outdoor spaces increases the appeal to potential employees as well as the productivity of employees.

By providing parks and open spaces in terms of not only traditional parks but also green corridors that connect destinations, Greater West Houston will attract new residential developments and businesses with commercial development following closely behind, all of which will result in a positive impact on the economy of the region.